History lovers will appreciate the age of Pagosa Springs and adventure lovers with be thrilled to explore the mountains with an off-road rental. At Pagosa Adventure Rentals, we provide explorers an opportunity to see a different side of Colorado, one that is full of history and thrilling rides through mountains, over streams, and across fields.

The original inhabitants of this area, the Utes, called it Pah-gosa (“pah” meaning water and “gosa” meaning boiling) In recent years, it was changed to Pagosa, meaning “healing waters.” The natural hot springs that runs along the Piedra River and the Great Pagosa Hot Spring may be the source these names. Control over the Great Pagosa Hot Spring was fought over by the Utes and the Navajos but was eventually taken over by the Brunot Agreement in 1874. Many local names and history are attributed to the Ute Indians.

Find Which Trail To Try First!

In the 1790s, a caravan of Frenchman was prospecting for gold but was overtaken by disease, hostile Indians, and severe weather. Near Treasure Mountain, they had to stash the gold and leave before more men were killed. Only two of the remaining 17 men had maps of where the gold was hidden. Evidence has been found of the caravan, but the gold remains hidden to this day. 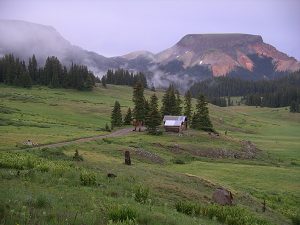 When the Spanish conquered Mexico, they moved within 200 miles of Pagosa Springs in the early 1500s. Led by Don Juan Maria de Rivera, an exploratory mission began in 1765. They moved to Santa Fe and searched for gold and silver, but the focus switched from prospecting to developing a trade route which would connect the Rio Grande Valley and Northern Mexico settlements. Other explorers learned more about the area and traveled on to Utah. The route that they created became known as the Old Spanish Trail and became a well-traveled corridor and helped open up the country to traders, caravans, and travelers.

With the discovery of the Great Pagosa Hot Spring and upon learning that gold could be mined in the Rocky Mountains, more and more people settled in the area. Fort Lewis, a military outpost, was established on the west bank of the San Juan River to diffuse tension between settlers and Indians. With new railroad coming through Pagosa Springs and mining in the Durango Silverton area, Pagosa Springs began to grow into a town.

Pagosa Springs was incorporated on March 2, 1891. With cattle and sheep ranching, lumber, motels, and businesses, the town began to flourish. Continuing with growing churches, blacksmiths shops, hotels, schools, and newspapers, along with the opening of Wolf Creek Pass, even more development was brought in.

Visitors to Pagosa Springs will fall in love with the natural beauty, resources, and solitude that continue to amaze. Come to Pagosa Springs for rest and relaxation, but don’t miss out on the expansive mountains and national forests. Off-road rentals are a fantastic away to see a side of Colorado that is deep in history. Contact us today to reserve an ATV or UTV rental, or even a retro motorcycle and experience the riding trails of Southwest Colorado.